Manipuri may be described as a dance form which is at once the oldest and the youngest among the classical Indian dances. In its present form, it is comparatively unfettered, being bound only in a limited manner to the literary word and the rigidity of the tala (time measure). It is seemingly free and spontaneous, apparently easy and flowing. Looked at closely, this dance style is the manifestation of a deeply ritualistic tradition, combined with a vitality with which an art-form throbs only when it is shared by the community at large.

There is no coherent history of the earliest inhabitants of Manipur, a jewel of natural beauty lying amidst the hills on the north-eastern border of India. However, there is enough evidence to prove that a rich culture flourished here even during the pre-Aryan days. The small valley and the adjoining hills sheltered several ethnological types; many tribes generically known as the Nagas inhabit the area to this day. 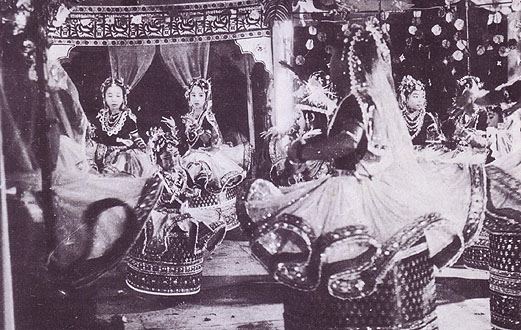 Manipur belongs largely to the valley people who call themselves Meiteis and trace their origin to the Vedic times. Whatever the heritage, it is fairly well established that many ritual practices were prevalent very early in the region. The continuity of such ritual practices is sustained by the dances. The ritual dances are not merely trance dances or dances for exorcising evil spirits, but are of sheer devotion and dedication to their gods.

The Meiteis as a community were well-versed in innumerable ritual dances, and the most exquisite examples are the rituals of the maibas (high priests) and the dance of the maibis (high priestesses). These high priests and priestesses are the heralds of good. Clad in spotless white, they invoke the deity through repetitive but disciplined movements.

Not until the eighteenth century did Vaishnavism become the State religion of this secluded valley, although some from of Hinduism may have reached there earlier. This, of course, is conjectural but seems valid because some of the Meitei dances can be identified as based on the earlier Shaivite tradition. 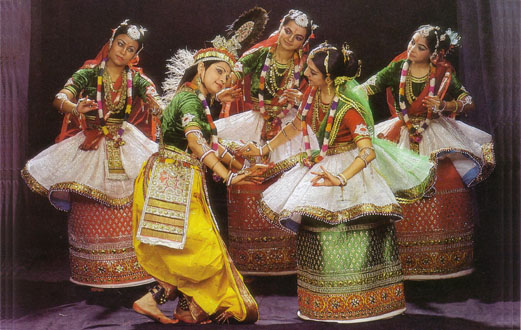 The Manipuri classical dances are sheer visual poetry: the gliding and spinning movements are enhanced by dainty and elegant steps. The figures sway to music and the arms move in slow circles and arcs. Each move of the dancer flows into the next without noticeable transitions - the body merely curves and recurves into different poses and stances. The gentle undulating movements are accompanied with serene facial expressions. Even when a performer executes difficult high jumps or different moves in quick succession, the postures retain a supple and fluid quality. The technique of executing continuous flowing movements presents a definite contrast with the taut postures and sharp thrusts encountered in the dances from South India . Again the facial movements in these dances are only suggestive in nature. In general, Manipuri dance aims at controlled but fluid motion as opposed to terse angularities and exaggerated gestures.

The free and spontaneous movements of the dancers offer no apparent indication of the complexities and intricacies that distinguish the dance system. Interestingly, this style of dance reveals a highly evolved form in the distinction it makes between the tandava (virile and agile) and lasya (soft and lyrical) aspects of dance - a feature not found in other Indian dances until recently. 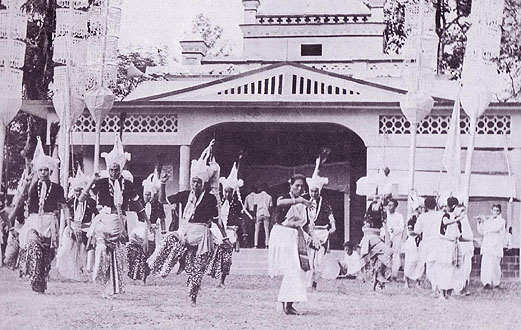 Among the dances of Manipur, the Lai-haraoba can be considered the most basic. It is obviously connected with the practices and traditions relating to the animistic pre-Hindu deities, and later appears to be influenced by Tantric worship. Dedicated primarily to the Umang-lais (village divinities) who have been accepted as ancestors of various Manipuri subclans called yumnaks , the Lai-haraoba is performed annually in every Manipuri village.

"Lai-haraoba" literally means the merry-making of the gods, and the festival is celebrated every year, sometimes in April or May, in different areas of the state. 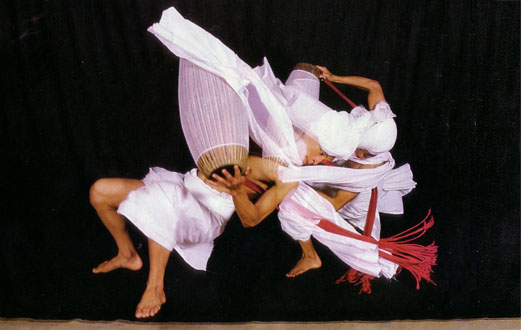 Sankirtan the dance of devotion

Traditionally, the Sankirtan follows an extremely strict code in its performance. All its elements - such as the dance, (its composition and choregraphy), songs, music, talas (time measures) and rhythm patterns as well as its costumes - are determined by specific rules and regulations.

By means of drum syllables and body movements, the dancer seeks to imitate nature, often reproducing sounds such as that of drizzling rain or thunder, and the gaits of birds or animals. 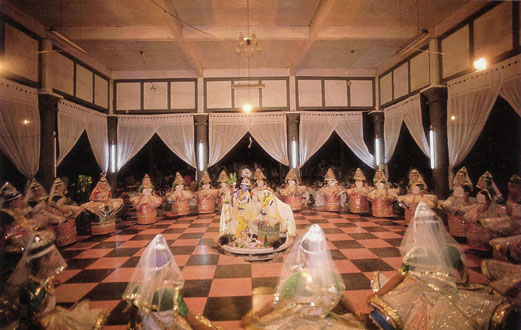 The Shri Shri-Govindaji temple at Imphal is the most revered shrine in Manipur and the focus of all major Vaishnavite religious activities in the region. Performances of the Rasa-lila take place on the night of the full moon during the different seasons. They are first presented here and only after that can they be enacted at local khulak (village) temples.

The temple, which houses the images of Krishna and Radha, faces eastward and is aligned with the rasa-mandapa (pavilion). The devotees enter the north-west side of the temple, bow gracefully before the deities and proceed to the rasa-mandapa for the performance. This gesture of deep respect and love indicates the devotional feeling that pervade this event.

The Rasa-lila performances follow a predetermined traditional kram (order). Of the four main Rasa-lilas, the Vasanta-rasa has the most comprehensive and clear five-part structure.